I loved Maryland so much that I had to come back for the half the next year! We stayed in Easton, MD again and had no complaints!

My mental game going into the race was exciting, anticipating how I might improve and hungry (for food and a PR!).

The weather was on my mind a lot as the forecast looked morose and suggested actual thunderstorms for a lot of the potential race time. The weather held off and it didn’t rain until I reached my hotel bed, feet up, ice on the knees and then it broke loose and looked as if the flag pole and trees directly outside our window were to crash in. We got L-U-C-K-Y because no one’s got time for that on the race course!

I climbed into my wet suit fairly calm. I’d say I really wasn’t feeling super nervous, more excited to get going and see what I could accomplish. My plans were to push the swim as I thought this could put me in a good place and keep my mental confidence going for a lot of the race just knowing I was swimming with the best of them. Goal was to PR which meant breaking 34 minutes for the half iron swim distance. I went 33:26. Goal met. Check mark!(Actually I looked at my Smokies tri swim and it was 31”, woops…)

I checked my watch out of the swim and read 33 and was pumped to get on the bike. The temperature was perfect. I wasn’t hot and I never noticed being semi wet starting on the bike which is rare. I was already in my bib shorts, so I put my socks/cleats on, my jersey, sunglasses and helmut and got my bike!

I did like Drew said and rode 20 minutes watching my HR go down (in the high 160s-70s) after running from the swim and the excitement…etc. Once it stabilized I rode to a steady zone 2, for me that’s about 154-160 HR. I really kept that consistent and it totally paid off with my chopping a solid chunk off of my bike time. With a bike time of 3:43 two years prior at Ohio 70.3, and the year before at a (hilly!) bike at the Smokie’s half distance tri a time of 4:07, I slammed it and got a 3:09! At this point I was really excited. I had a secret long shot goal of breaking 3 hours as I felt like the time and most importantly—the quality—spent on the bike was good. I felt great.

What I would keep the same: my mentality on the bike, just 5 more miles and putting it to the grindstone, taking it all in and smiling.

What I would change: drinking a bit more frequently and keeping my nutrition going more. I think I may have dipped a bit a couple times, slowing my pace.

Next race: keep up the fluids a bit more, and sugar intake.

Onto the run. My legs were literal bricks getting off the bike and heading down the chute was rough but it helped get my legs going. I racked my bike, changed by shoes, traded a helmut for a hat, attached my bib and salt capsules and had them douse me in some sunscreen. It was humid-hot and the sun was actually out now despite the forecast. 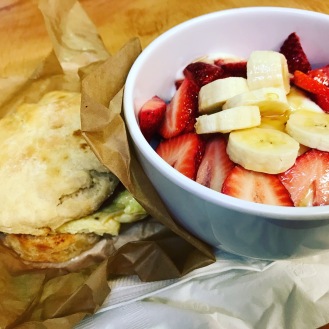 I got running and felt happy and good! I think my mom noticed this as well because she said, ‘Alex you are doing great!” She must have known. MOMS ALWAYS KNOW.

I got going and felt slow despite my high morale and was actually going too fast at first (apparently that’s common?). I was between 8:15 and 8:45 min/mile which would be dreamy for the entire race but that quickly wasn’t the case. My plan was to settle into a 9:15 race as discussed with Drew which I got to and ran relatively well for the first hour, but reaching miles 6,7,&8 I just let the wheels fall off the wagon unfortunately. Looking back I think there are two things I need to change. I need to take in more fluid and cool myself down more (I actually think I did a relatively good job I think doing more would have enhanced the effect). That means ice in the jersey and bike shorts as I run, and taking in a bit more Gatorade but not much. I also think I just didn’t have enough grit in the run. The swim and bike made for great PRs, I was so excited but during the run those achievements faded away and it made me realize I felt like I was back into the hole, just hanging up my race plan and that wasn’t what I trained for.

Next time: Grit out the run, cool off more, take in a bit more Gatorade and salt.

Looking at this race report now there is much to change but my mentality and goals are definitely still in tact!

I'm a person that collects moments...and lives to tell you about them. View all posts by hotchocolatehappyhour